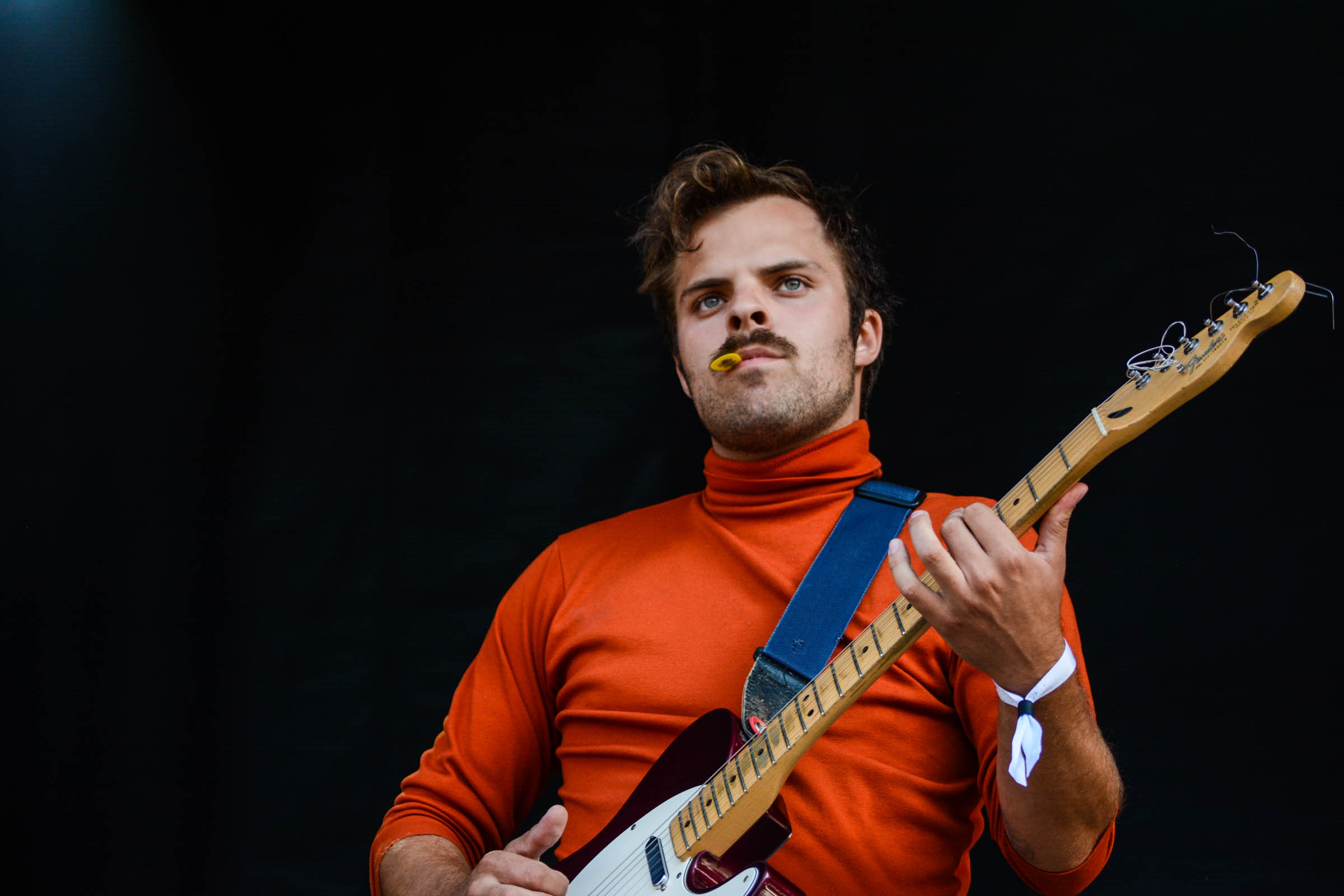 This was the first year of Constellation Fest and NineEightSeven’s first year covering it!

Constellation took place on Hendricks Field in Squamish from July 26th – 28th. The Greater Vancouver festival market has been notably lean in 2019 as older mainstays such as Squamish Valley Music Festival and Pemberton have bitten the dust while Skookum and Rifflandia took a year off.

Constellation aimed to bring a west coast mid-size festival experience to the Pacific Northwest, and it did just that. The weekend was met with idyllic July weather (apart from a brief Friday shower). The festival grounds themselves were an excellent size. The crowds felt busy and excited, but not overwhelming. Beer, food, and bathroom lines were manageable. Similar to Rifflandia, Constellation used two alternating stages, with the main stage facing the Stawamus Chief.

Beyond the music, Constellation mixed in local vendors and artists, with several art installations evolving over the course of the festival. One paint-by-numbers zone had a large canvas and allowed everyone to get involved.

It is also worth noting that Constellation had many initiatives to go zero waste. They appeared to be partnering with waste giant, GFL, which allowed for waste-of-all-kind depositories and kept the festival grounds spick and span.

NineEightSeven’s 2019 Constellation Festival began in Vancouver Friday afternoon. By locating in Squamish, getting to the festival was relatively easy via car or festival shuttles. While camping was available off-site, NineEightSeven stayed at a nearby hotel to maximize sleep, bathrobes and water slides. 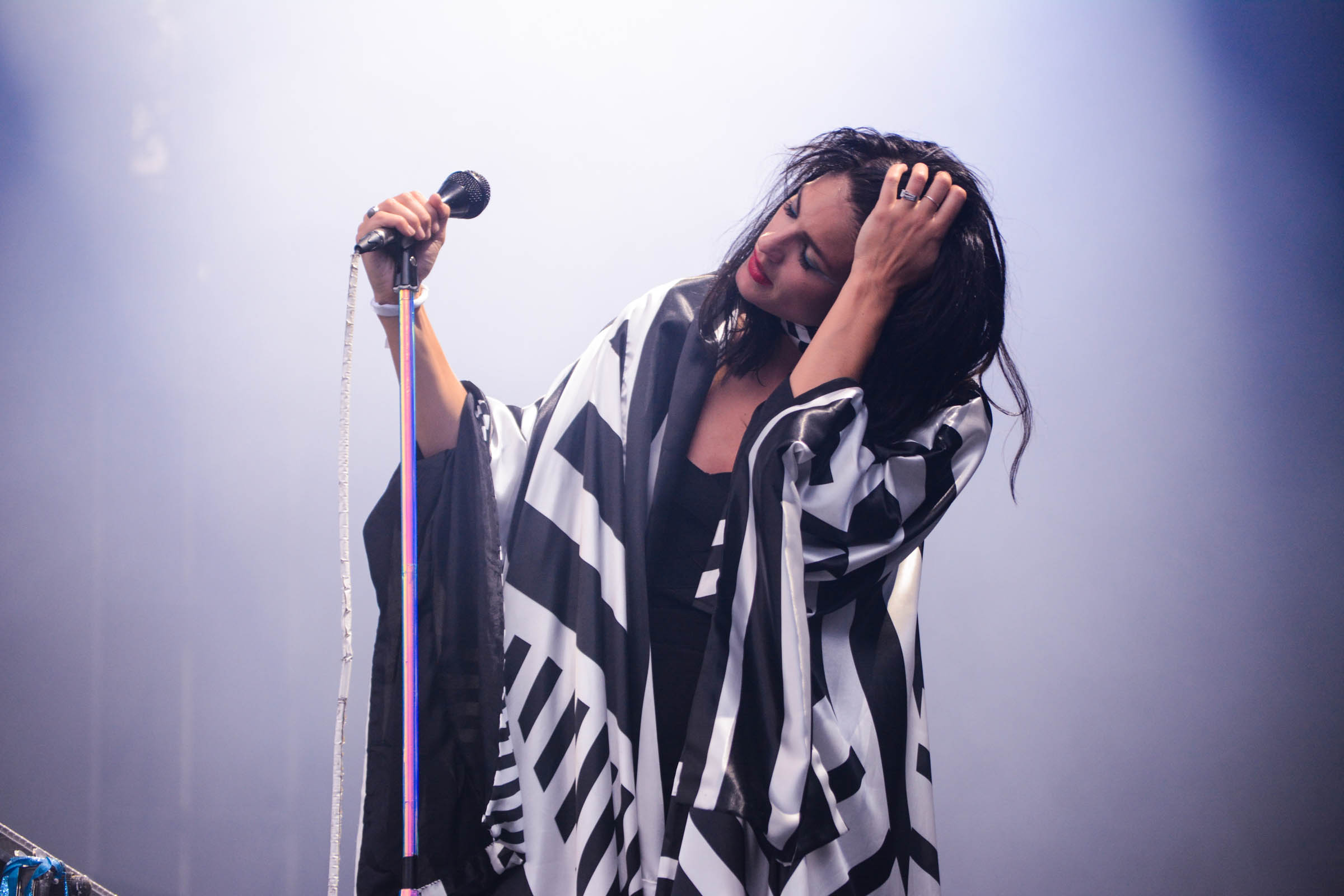 Following them, Edmonton band of brothers Scenic Route to Alaska took the smaller Creative BC Stage to smoke and a brief rain shower. They have a ‘Central Canada‘ guitar sound that fit right into the evening and fed into Friday headliner Serena Ryder. 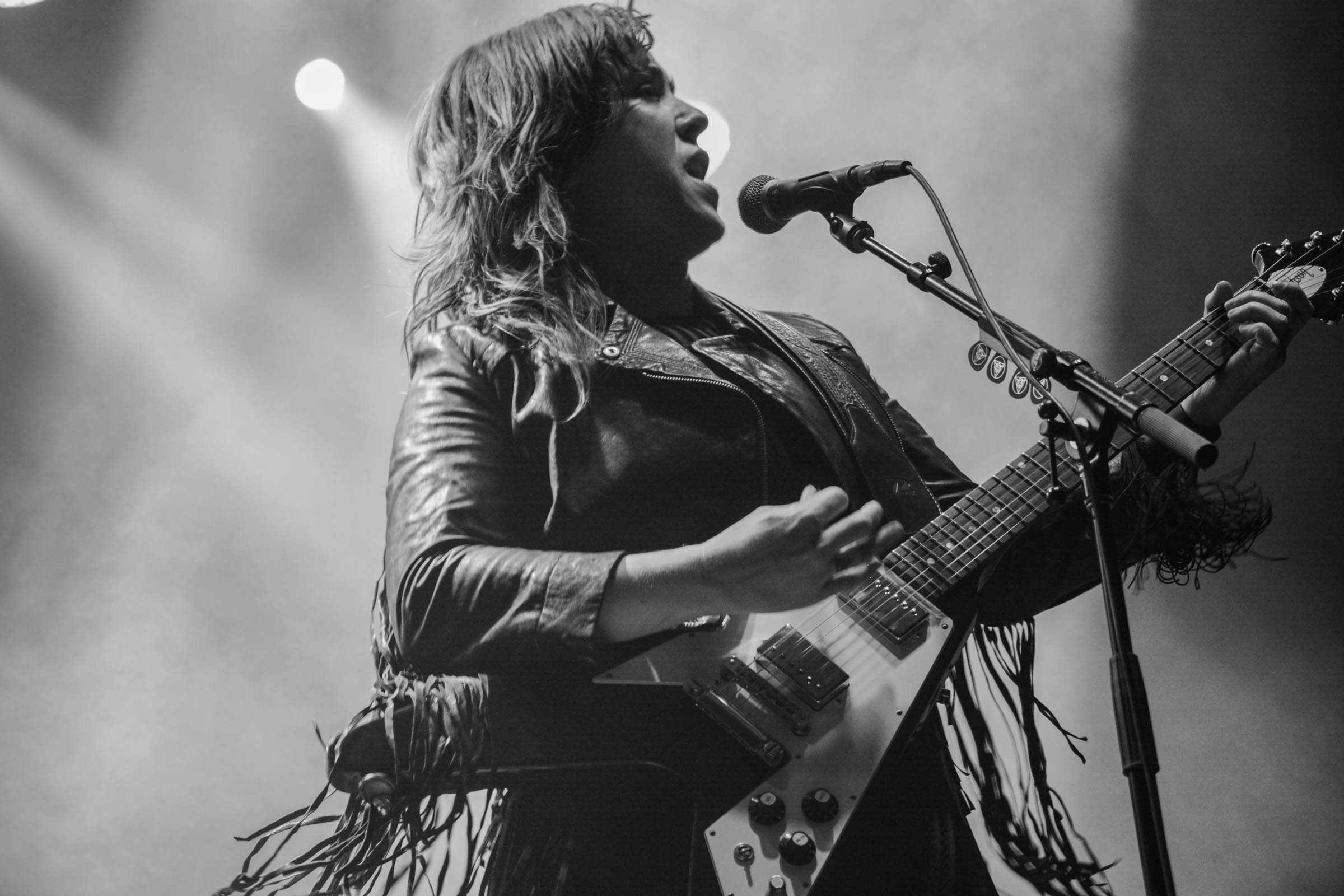 She began with her biggest hit, high energy, “Stompa”. From there, through the smoke machines, she mixed in slow songs and heavier guitar and eventually caused the only rainstorm of the weekend.

After a brief pit-stop, NineEightSeven hit up the official after-party at the best nightclub on the Sea-to-Sky, The Knotty Burl. Truly having everything one might look for in a post festival experience, The Knotty Burl provided a nightly option for a sweatier dance party after a day in the grass with more relaxed music. Hot Hot Heat’s bassist, Parker Bossley, played to a packed crowd eager for the night to continue. 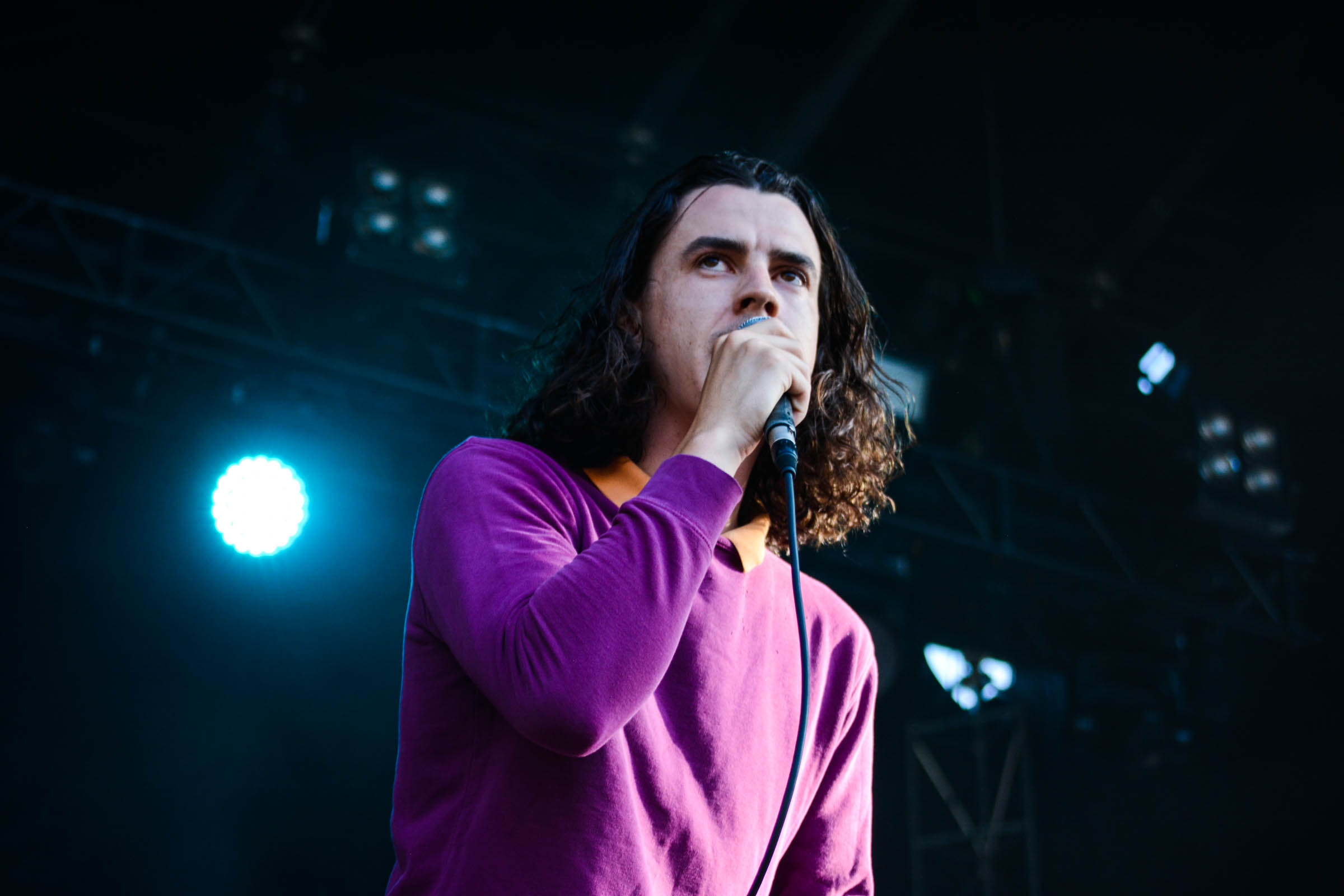 NineEightSeven made it in for Vancouver’s own, Peach Pit. Well, we made it in before that but got stuck at festival sponsor, Nude’s activity zone, sipping beverages and playing corn-hole. The Saturday crowd was a wide range of ages, with a surprisingly large number of kids. The family atmosphere felt at-one with a Squamish weekend while little posses of children roamed around coming up with games that only they could understand. Peach Pit came with facial hair, and a Vancouver hipster look and sound on the main stage. 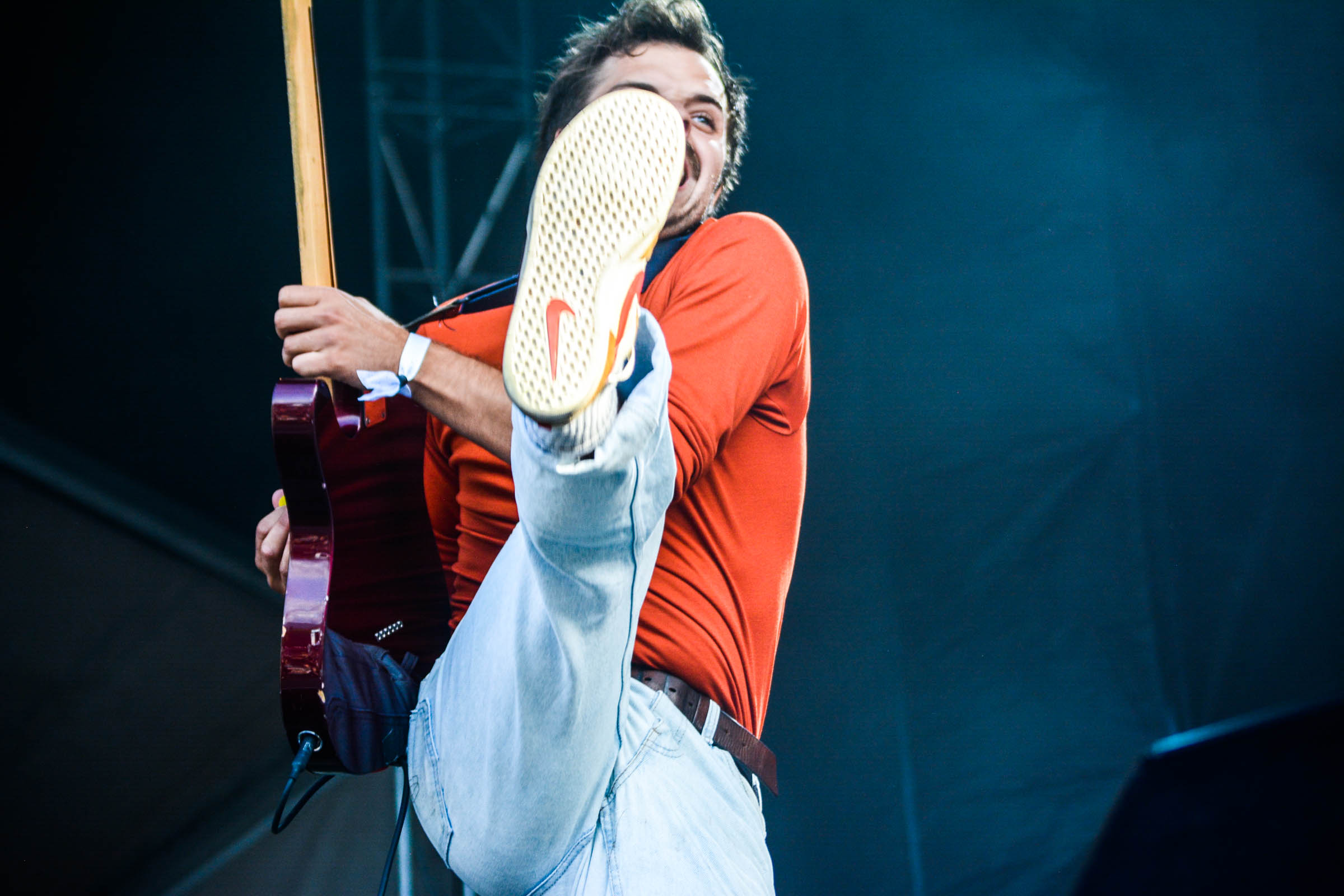 Following Peach Pit, rapper (and briefly Studio Q host) Shad was on the Creative BC Stage. He mixed older classics with some newer tracks and upped the hip-hop significantly after a couple days of largely Indie Rock.

Following in the hip-hop vein was A Tribe Called Red. They began with a message, letting the crowd know that one of their members had been profiled and taken out of the festival. In response, the crowd booed and were firmly siding with A Tribe Called Red. Once the set began, some truly spectacular indigenous dancers and hoops wowed and accompanied classics such as “Electric Pow Wow Drum”. 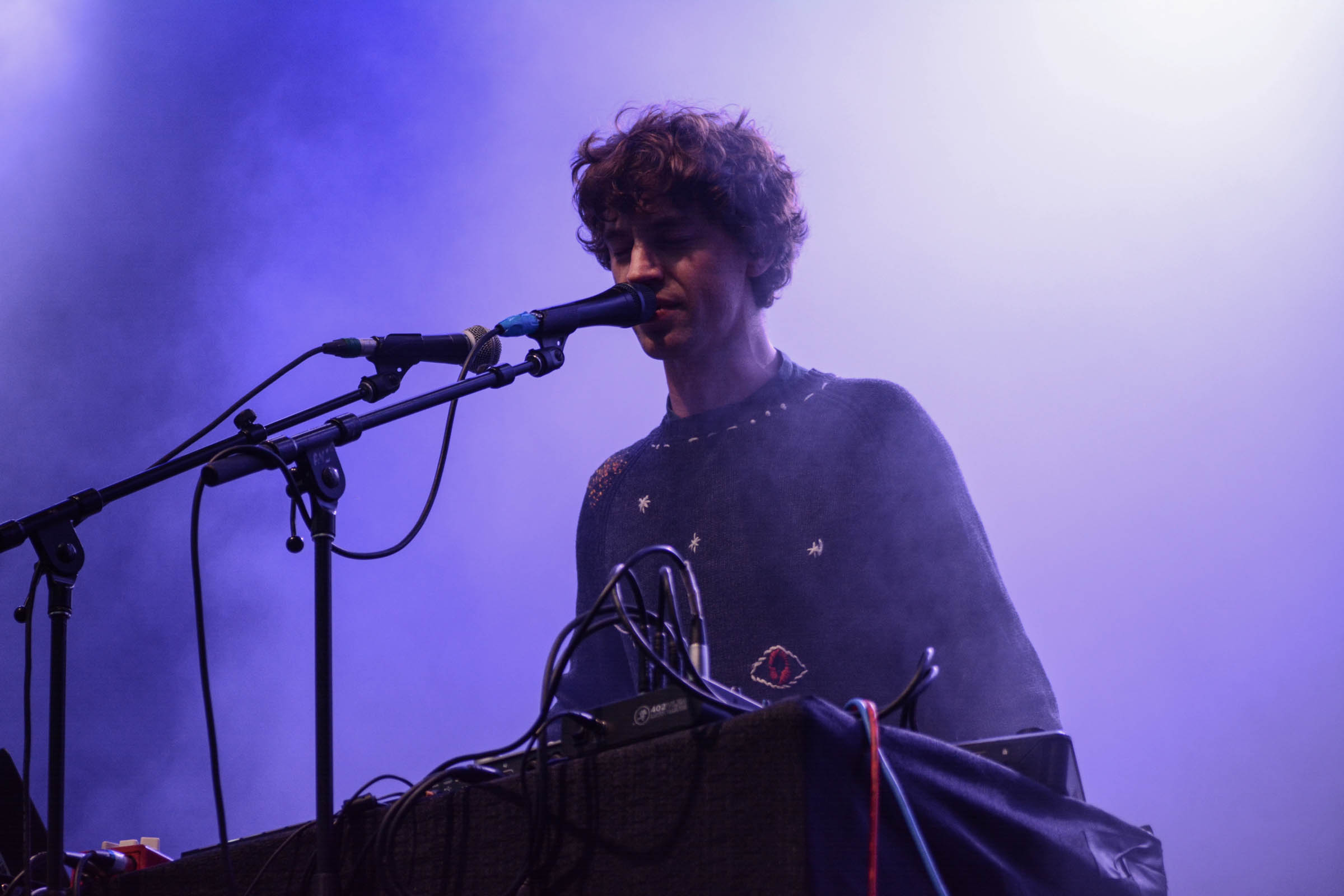 NineEightSeven’s surprise favourite of the weekend followed, Cosmo Sheldrake. A couple of his songs have hit the mainstream in a few surprising ways, “The Moss” and “Come Along”, popping up in places such as Apple ads and the intro to The Masked Singer. He seems to mix lyrics you might associate with Dr. Seuss into a looped DJ set. His soft-spoken London accent matches his on-stage persona: perfectly: unassuming, but in full control. Fortunately, this was not the last time we saw Cosmo that evening. 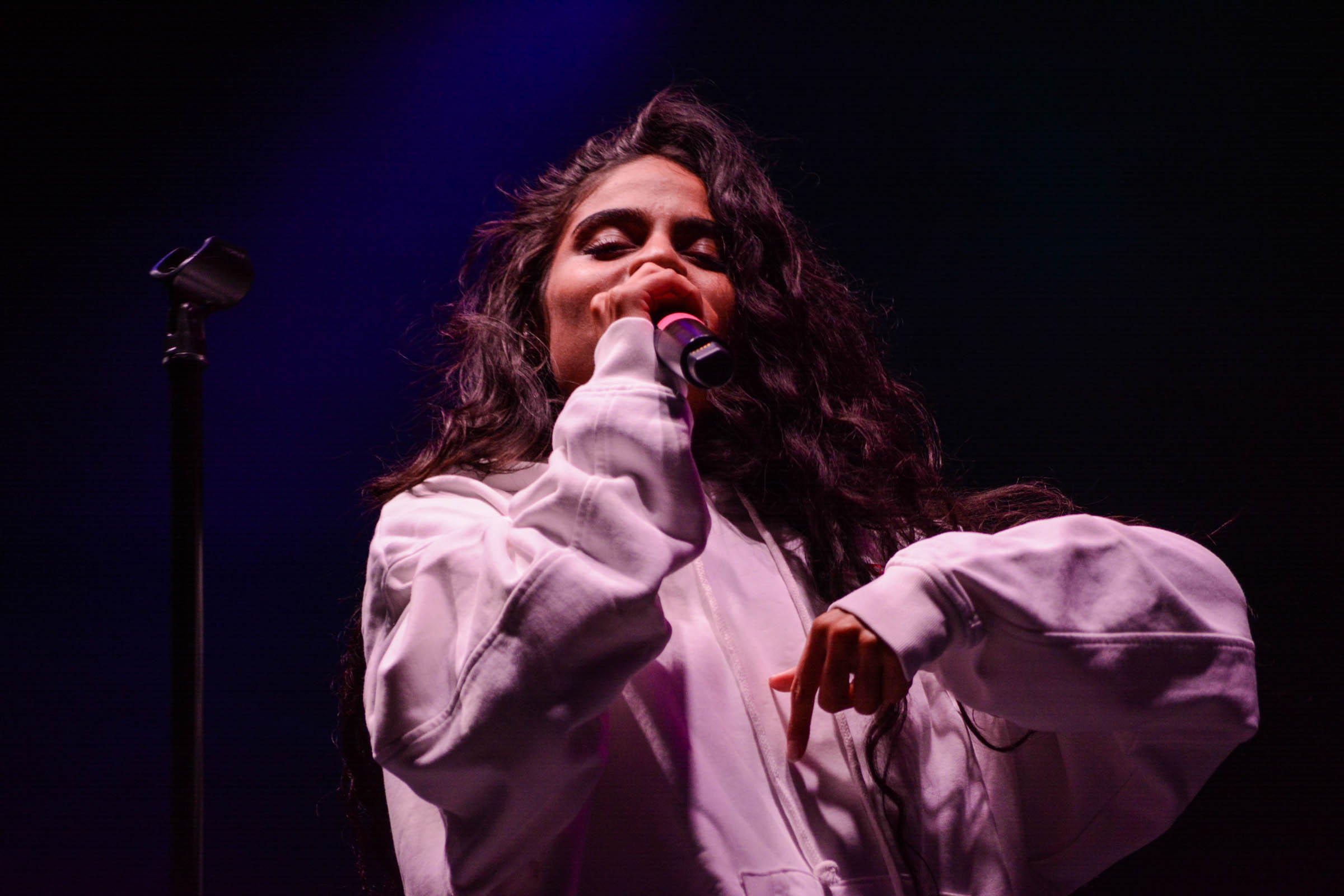 In the roll of the Saturday closer, Jessie Reyez. You probably know her by now, but if not, she made cross-Canada radio waves with “Figures” in late 2017. However, only associating her music with Figures misses the R&B/rap sound of much of her other stuff. Unfortunately, Jessie hurt herself a few weeks prior and for a while Constellation looked dicey. However, she made it and began in her signature hoodie and hat. She went through classics such as “Gatekeeper”, “Apple Juice” and “Body Count” before lying down on the stage. Typically, she rips back and forth and today her movement was decidedly slower. She then said:

“You guys my back is killing me. I don’t want to stop the show, but I’ve got to sit down”.

All of a sudden, a couch appeared on stage and she lay on it and kept singing all the way through a closing “Figures”. As she likes to, she frequently brought the crowd in, telling stories of coming up performing on the street, and dealing with industry low-lifes.

However, the night was far from done as Cosmo Sheldrake was performing at The Knotty Burl. Reprising some tunes from earlier, with some new loops and mixes, he nearly didn’t play his biggest hit, “Come Along”. Fortunately, some aggressive crowd cajoling brought him back on stage to finish off Saturday at Constellation with this tune.

Sunday began slowly for NineEightSeven and the festival. Following legalization, cannabis giant Aurora sponsored a Weed Garden, enabling Aurora plastered hats to be on almost each on every head in the grounds. We checked it out before taking in songstress, Begonia. She has a big voice (think Lily Allen) perfect for larger venues and for taking in on the grass in front of the main stage. 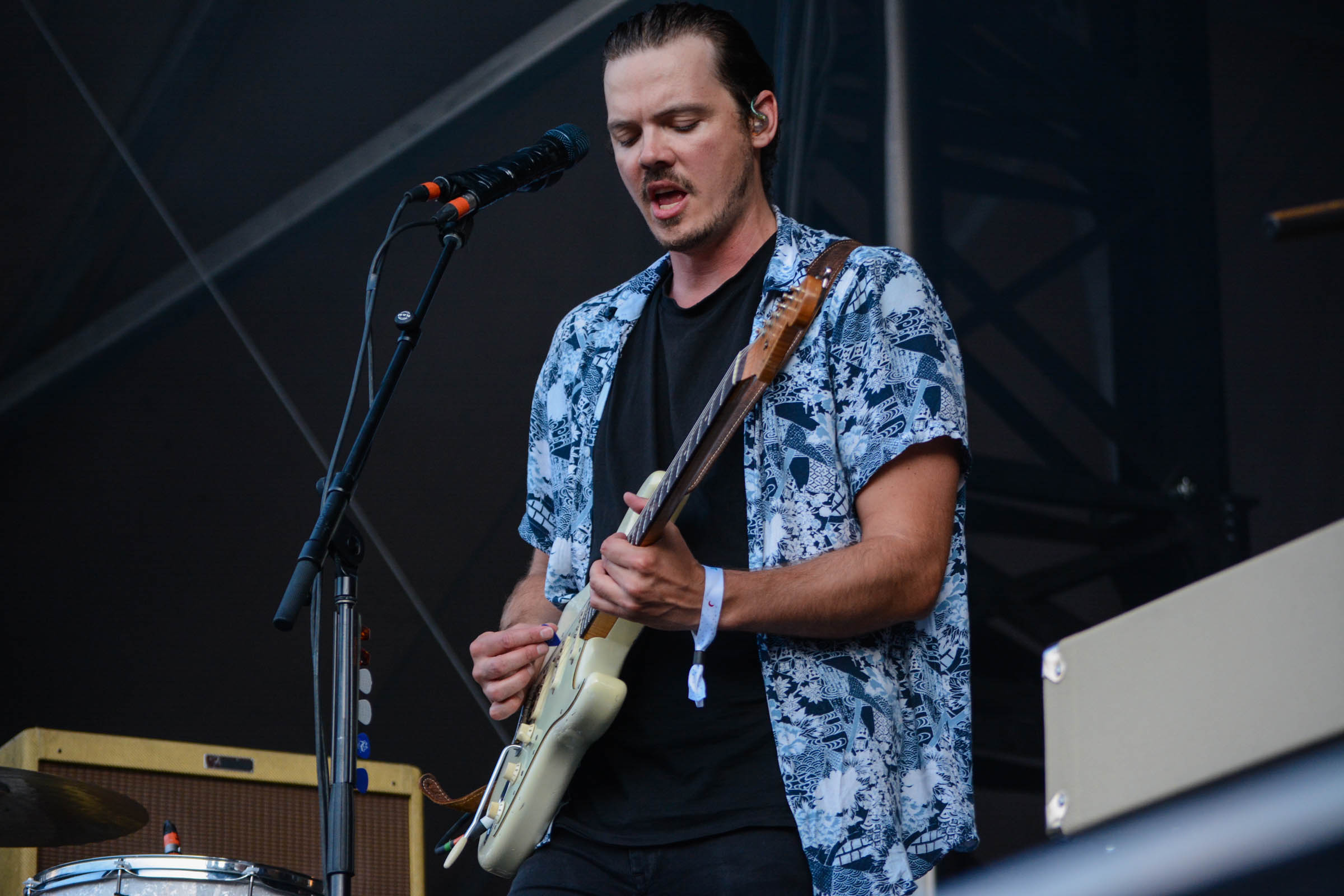 From there, Current Swell brought a little heavier rock before Sunday highlight, Half Moon Run. They sang dreamy classics such as “Full Circle”, along with the new single and a few other tunes off their at-the-time-unreleased album, “A Blemish in the Great Light”. 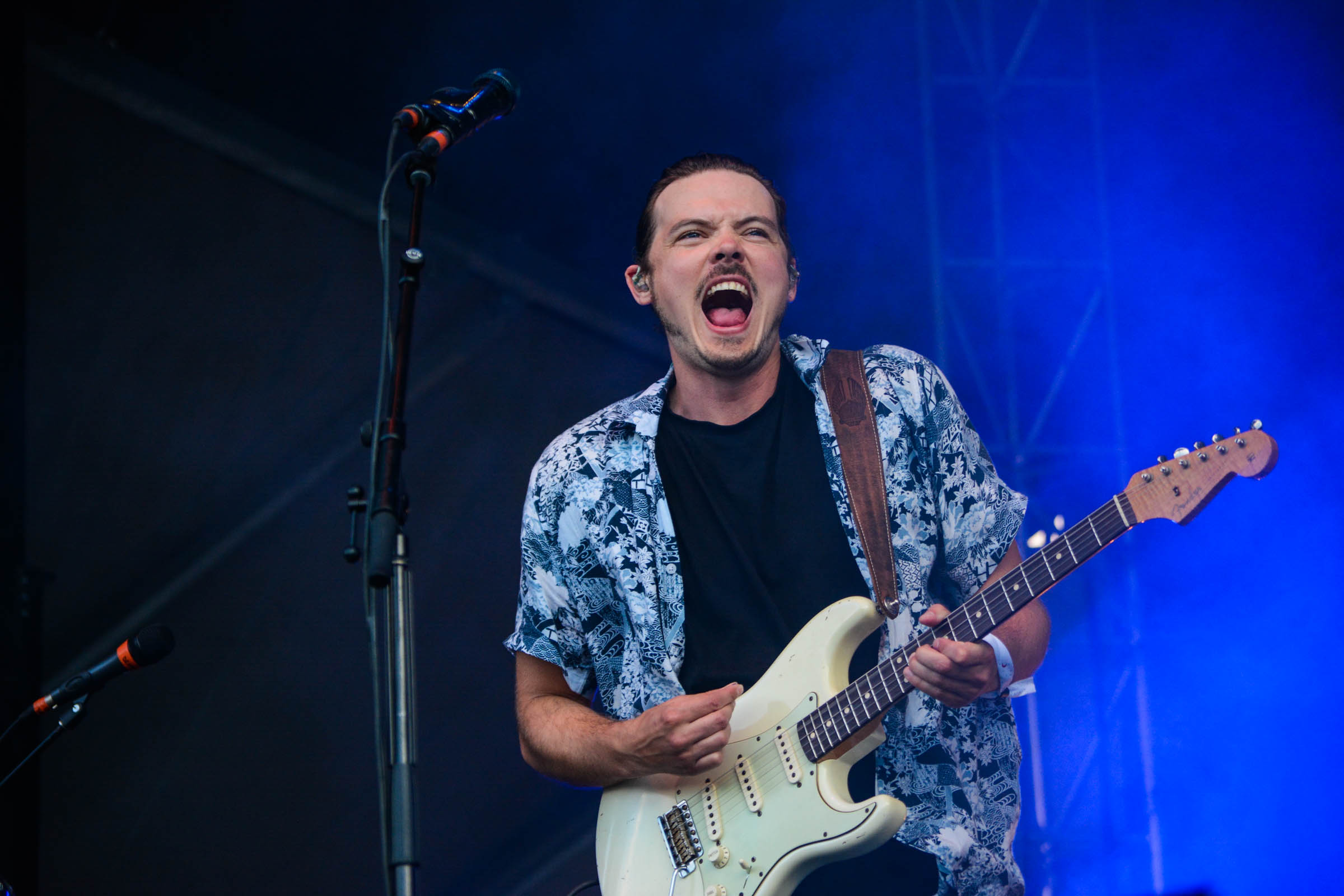 Unfortunately, from there, NineEightSeven had to jet back Vancouver way, eagerly awaiting Constellation 2020 (July 24-26).

Judah and the Lion // Orpheum

Sit back and get ready to go for a wild ride, because that’s exactly how the Judah & The Lion concert felt.

Their advertised opening act Floracash was a no-show, with local Vancouver band Harlequin Gold taking their place without explanation.

Set in the gorgeous Orpheum theatre, the acoustics played out well, although the seating situation made it a little hard to rock out. When it was time for Judah & The Lion to come out, the lights dimmed drawing a hush over the crowd. The great white sheet hanging in front of the stage became illuminated, silhouetting the band and their marching drums hanging from their necks. An intense play of light and sound began, with the shadows and flashes matching the marching band beats. Choir like vocals filled the air and then suddenly the curtain was dropped to reveal Judah & The Lion performing the title track from their latest album “Pep Talks”.

In a blast of music and art, the concert was underway with such high energy from Judah Akers as he ran around stage moving in such a signature way, it was hard not to smile at his authentic love of performing.

If you’re new to Judah & The Lion, they’re a Tennessee band with a 21 Pilots-meets-bluegrass vibe. Their music is a wonderful amalgamation of guitars, banjo’s, electronics and suburban teen angst. Their lyrics are always relatable and honest in a way that makes you feel like you’ve lived the same life, or at least a parallel.

Judah kept referring to the seats in the Orpheum as a hinderance to rocking out, but urged the crowd to overlook the seats and come dance in the aisles. Between songs, he made audience participation a game by separating the crowd into two teams. One team was placed on banjo player Nate Zuercher‘s side and the remaining team on mandolin player Brian Macdonald‘s side. Making everyone dance without inhibition, Judah kept the crowd participation up the entire night, constantly jumping from side to side without playing favourites. 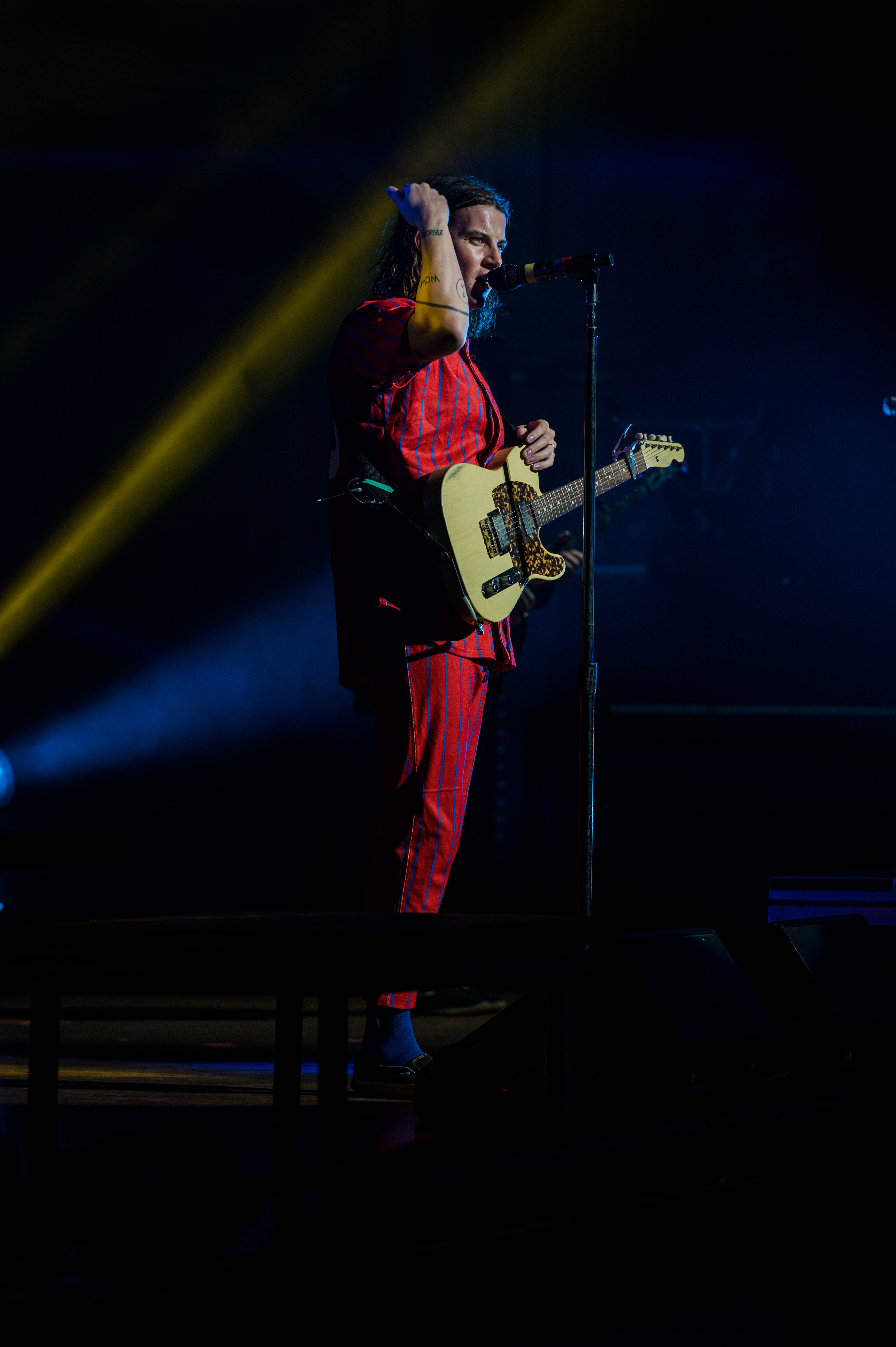 The segue between songs was a beautiful storyline, carried along by perfectly timed lights and sound.

It felt like a magical experience in a church of music, with the way Judah slowed down the music and took the time to talk about his personal experience of being on the road, and how he came to write “pictures” – a song recorded with Kacey Musgraves.

Judah opened up about his parents’ divorce and struggle with addiction, explaining that the song stemmed from an emotional call from his mother, while she was packing up his childhood home up during his tour. The song started with only him on stage, but ended with the entire band coming out to support him with vocals and other instruments.

Each of the band members wore tops that had the word “family” emblazoned across the front, and it felt like family and unity were the main themes of the night. 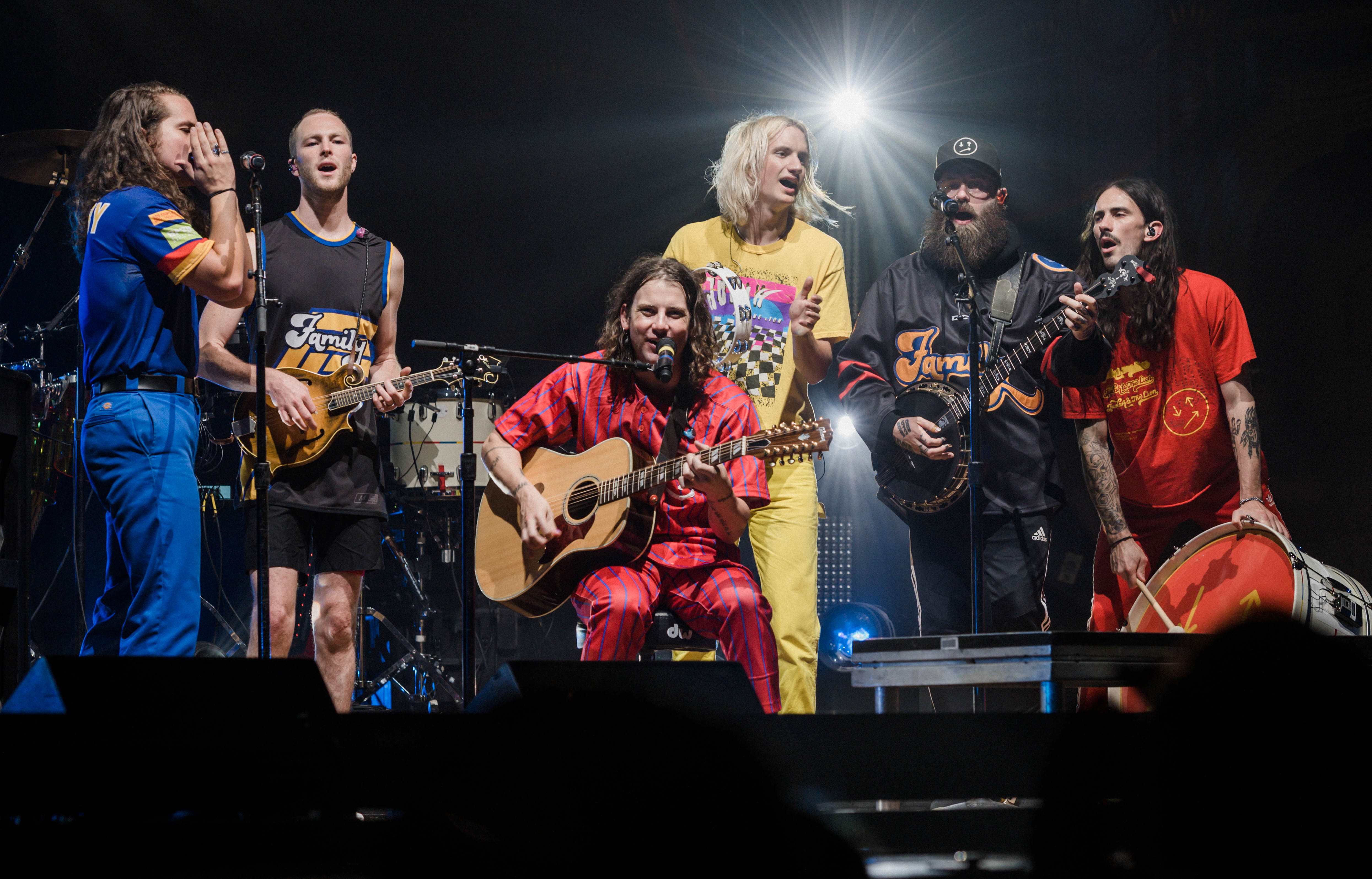 Moving from slow songs on piano, to high energy seemed like an impossible task, but with flashes of air cannons and bright lights, they were at it again, throwing the cheering crowd into favourites from their 2017 album Folk Hop N’Roll.

Running into the crowd and all the way to the back of the theatre, Judah made sure to high five as many fans as possible (something that must have been a nightmare for his security). He announced that he wanted to “bring out the rowdy” from the crowd, urging all of us to let go of our shyness and just dance, or do what felt right. 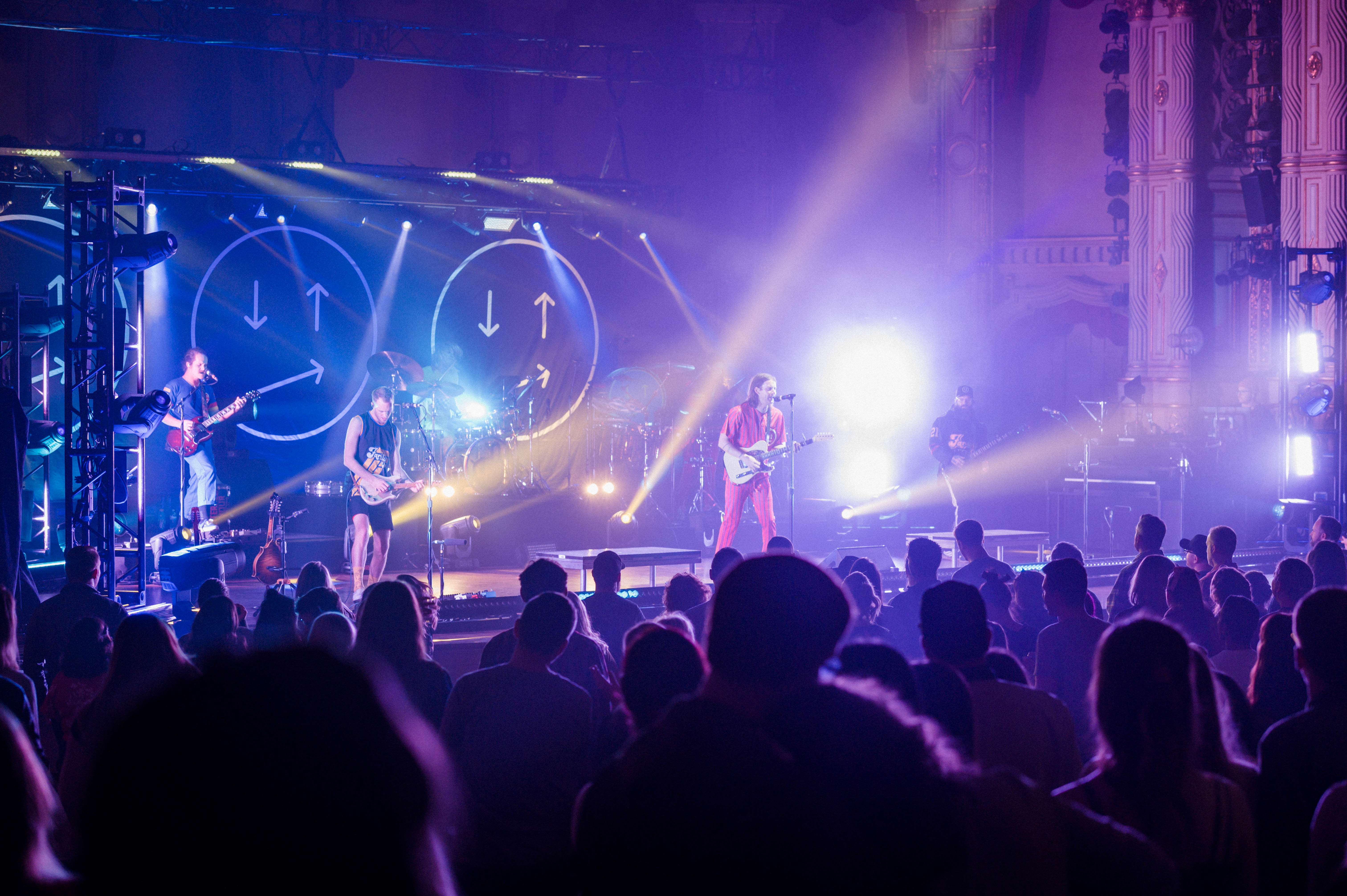 Though this was the 54th show on their Pep Talk tour, the band showed no signs of fatigue.

There was a truly touching moment when Judah played a song on his twelve string, slowing everything down to truly connect with the crowd. Nate had several gorgeous banjo solo’s, showcasing his true talent of the instrument, with quick fingered bluegrass riffs. Not to be outdone by his bandmates, Brian switched between various guitars and the mandolin throughout the entire set. The supporting band members were just as incredible with their energetic playing and tight beats. 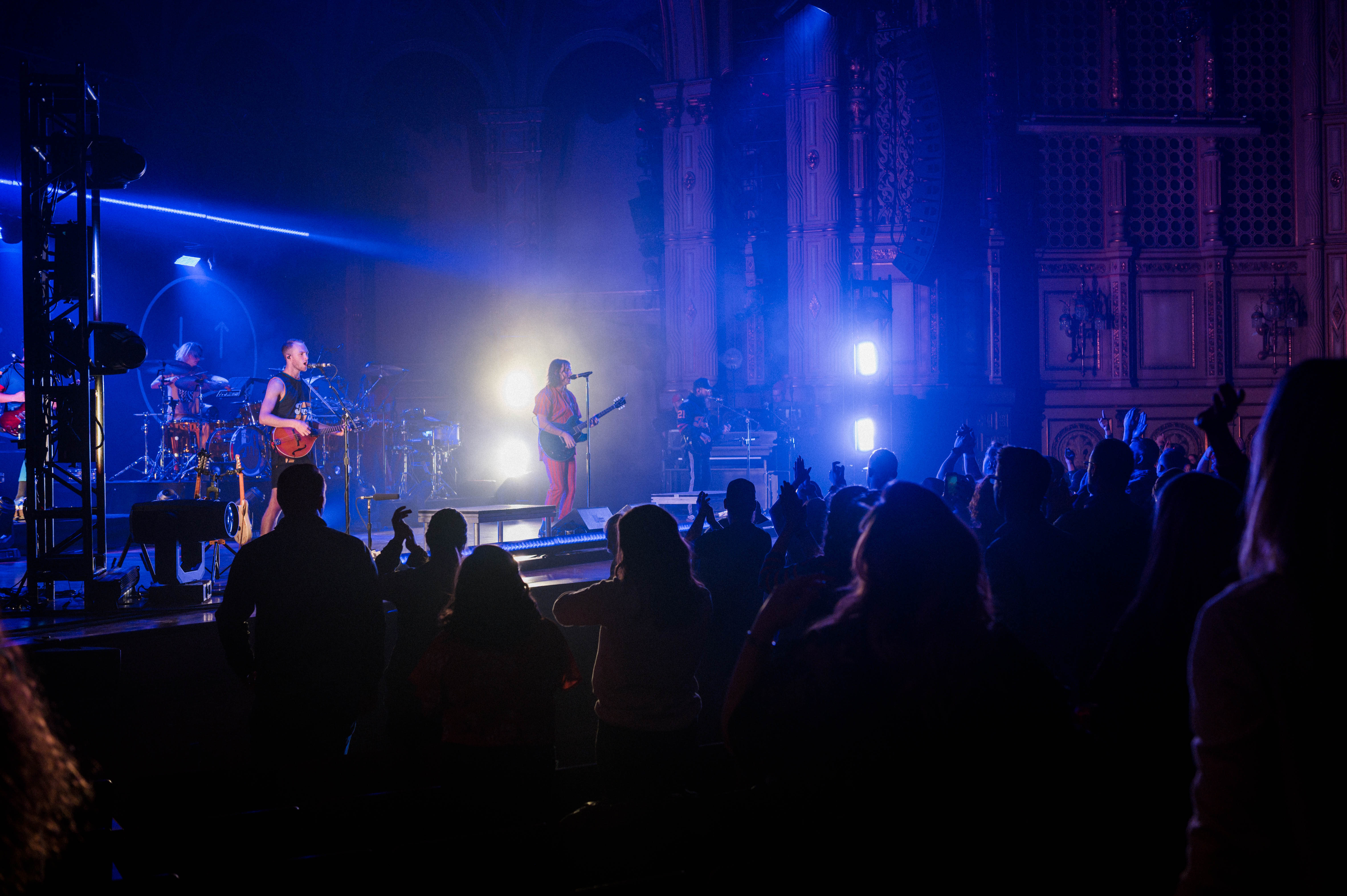 This is a band that needs to be seen live to have a masterclass in what a great performance looks like. From the cohesion that came with telling stories between songs through light and sound, to the rad dance moves of Judah moving like liquid and solid state all at the same time, there was not one fault during the almost two hour long set.

Positivity oozed from the band, and they reinforced the importance of family, love, respect and not letting your negatives stop you from doing anything.

Their encore consisted of three final songs, the crowd practically yelling the lyrics to “Take It All Back”. Once the final curtain had closed and the lights were up, the crowd walked out on clouds of elation. People that were once strangers felt like friends, not a single unsmiling face was seen in the Orpheum.