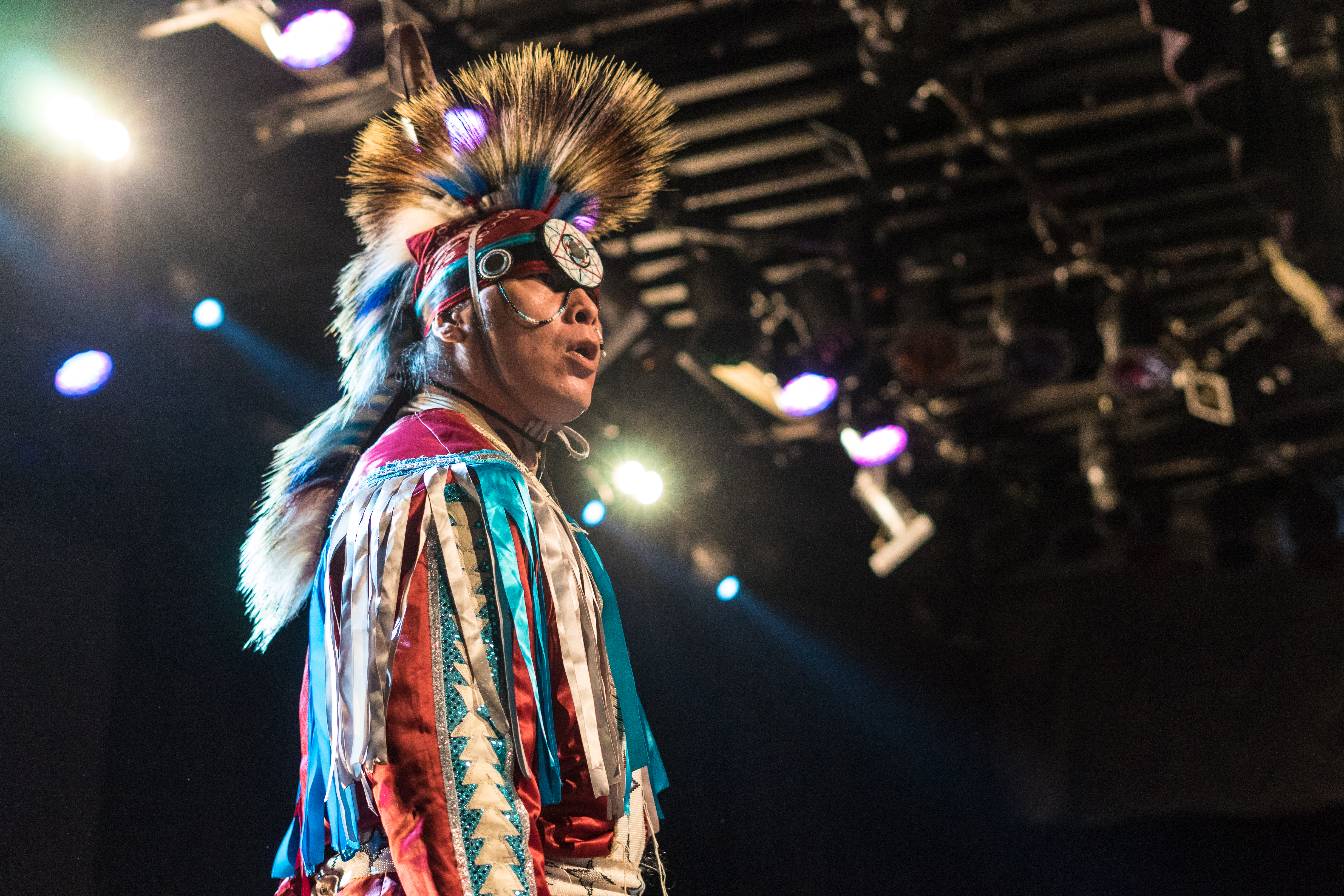 I first heard A Tribe Called Red about four years ago. One afternoon I was in my bedroom and suddenly loud drum beats shook my walls from the stereo in the living room; BOOM BOOM BOOM BOOM. Then, as the First Nations inspired chanting kicked in over the electronic music I burst into my living room to find a room mate flailing his arms and legs jumping to the beats. The two of us jumped and danced – invigorated by the tribal sounds. This was the power of their music. Music that is an evolution of Native sounds with modern dance and hip-hop . The drum beats create a sharp energy that hits on an instinctual level, making it near impossible to sit still.

When A Tribe Called Red announced that they would be performing in Vancouver, a friend of mine from the First Nations community of Klemtu in Northern BC immediately bought tickets for their show. The tickets sold out within the first day, so the band announced that they would add a second show to their Vancouver line-up and I purchased my ticket to join him on the second night. Before the show, I met my friend at his hotel and we reminisced about other A Tribe Called Red performances we had attended. He pointed out how one of his favourite things about the band was their appeal to all ages. Last summer, as we danced about to the tribal beats at PNE, a toddler approached us to dance with us and bounced along to our jumping. In the back of the crowd folks using wheelchairs and elderly people bopped their heads and clapped their hands. Every person had a big grin on their face. 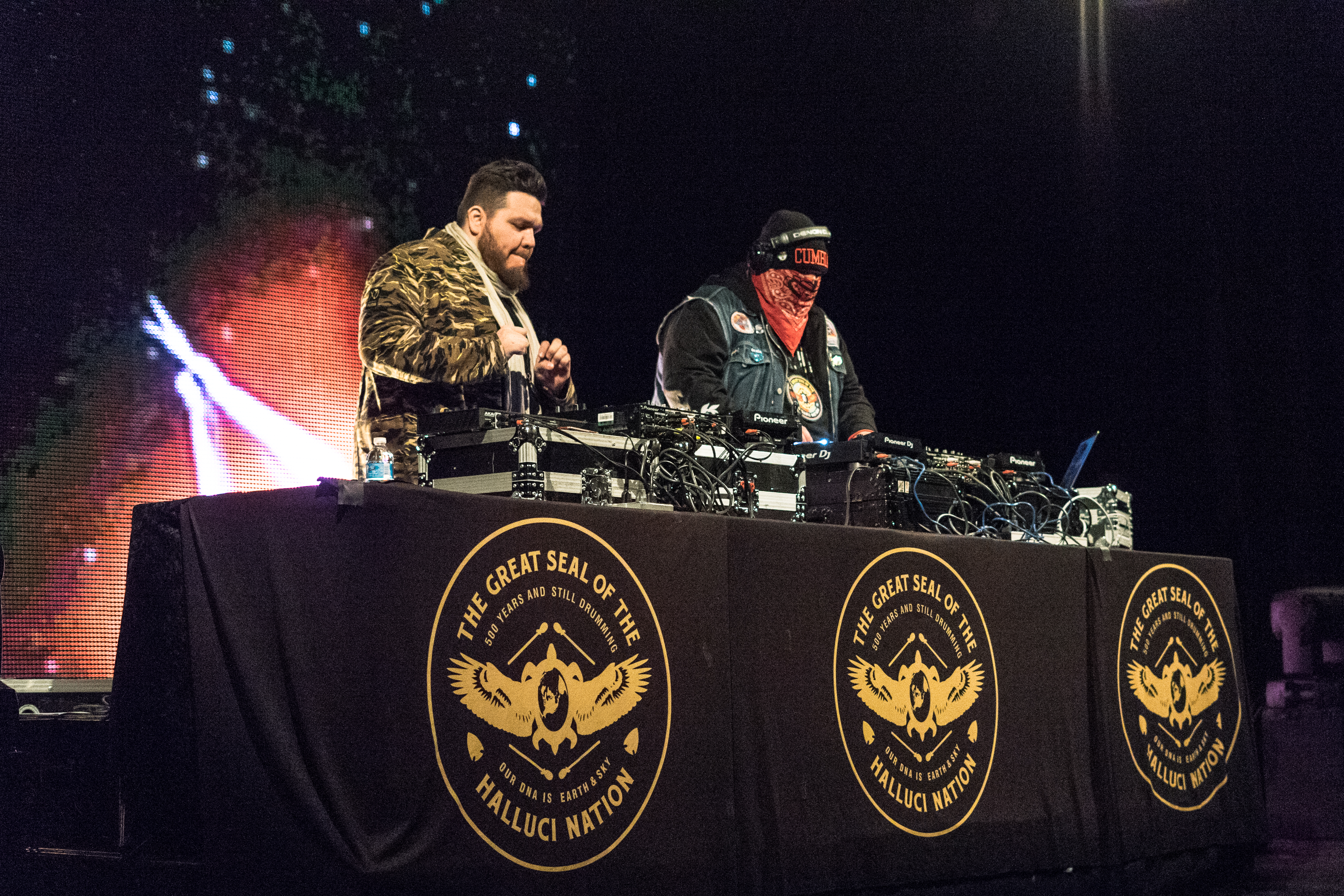 When we arrived at The Commodore last weekend we caught the tail end of the  opening act, El Dusty; sexy beats with a hispanic flare. I found myself instinctively dancing with my hips. Even though it was Sunday night, the crowd was awake and alive, driven by the sultry sounds. I thought it was a perfect opening act for A Tribe Called Red, with trap/hip hop mixed with a specific cultural flare (in this case, Mexican influence). The crowd was feeling sexy. After his set, the lights came up in the room and the music turned low. Most of the dance floor went off to line up for beers and the bathroom. I stood with my friends, making sure we had our place marked on the dance floor.

I remembered the last time I saw A Tribe Called Red they were chanting to the crowds, and prompting us to chant along with them, “FUCK ENBRIDGE, FUCK KINDER MORGAN!” Kinder Morgan is an oil company that is illegally planning on building more pipelines through unceded Native territory. This issue is only a more modern one in a long history of First Nations Rights land being used without consent. ATCR is an outspoken advocate of Idle No More, a grassroots movement bringing advocacy to Native peoples and their supporters. They speaks of this plight in some of their songs including “Burn Your Village to the Ground” or “We Are The Halluci Nation.” 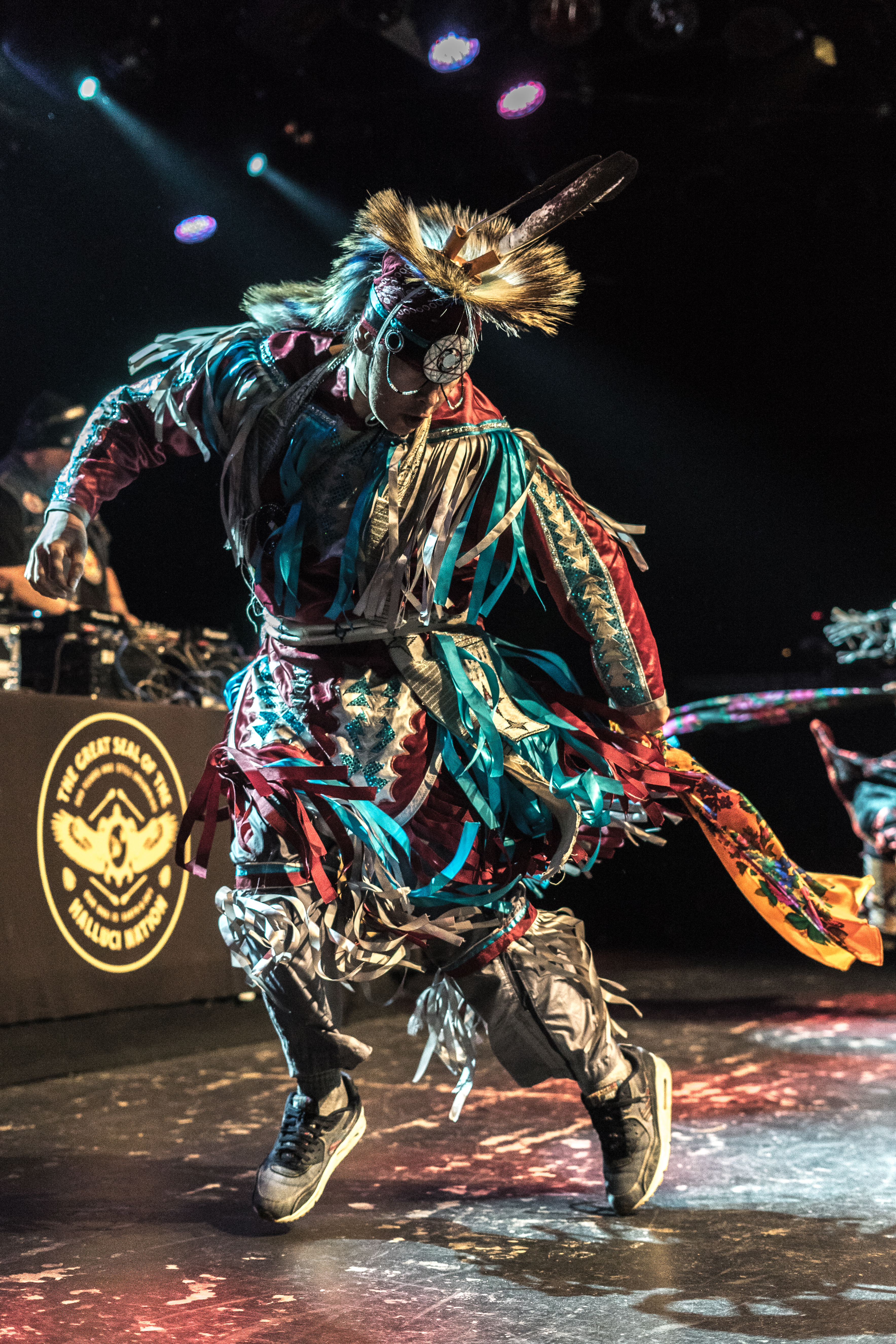 The lights turned off on the dance floor, and the stage lit up in an immediate frenzy as the music kicked in hard and fast. A Tribe Called Red opened with a remixed version of “Electric Pow Wow Drum.” The beat was hyper and the crowd jumped along with it. A friend of mine once said that there are three ways of dancing; you can self-consciously move along with the beat, you can dance in a way that exudes sexiness, or you could do what she called ‘mint’ dancing. ‘Mint’ dancing, as my friend put it, was when you’re ‘just give’n er‘. In other words, dancing hard and fast; not caring what you look like. The crowd was going mint. I was going mint. The music itself never relented in it’s beat; never slowed down, even a notch. A couple songs in just as I was starting to feel tired from dancing so hard, a group of break dancers took to the stage in front of the sound desk that the two musicians of A Tribe Called Red stood at. The break dancers acted as the hype, making the crowd go wild and giving us a second wind. 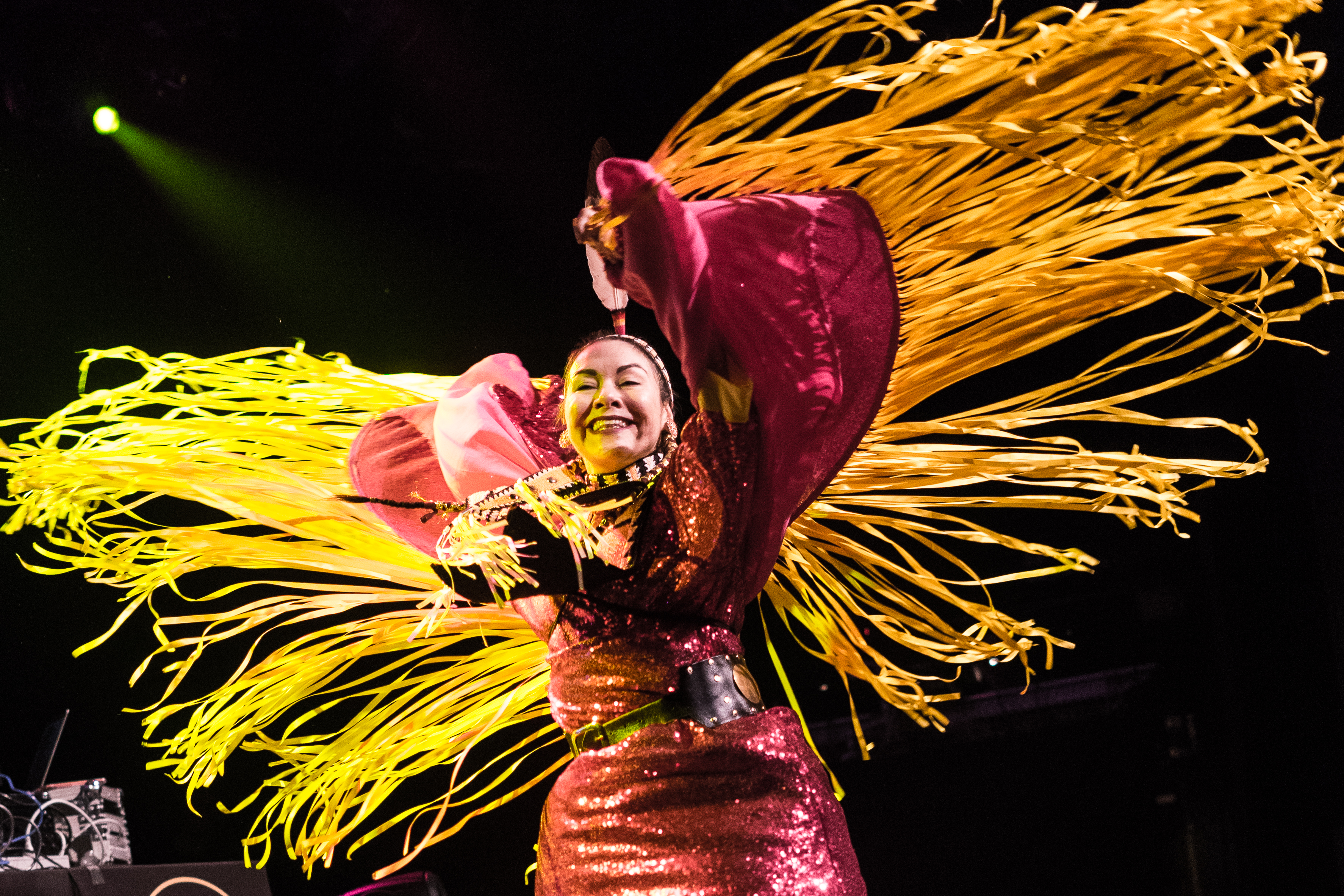 There was a noticeable absence from any sort of political message at this show, other than the continuous images of war running across the wall behind them. An image of warrior men in headdresses riding on horses raced on the screen. There were clips of Native men holding machine guns draped in feathers, with neon yellows, pinks, and white psychedelic patterns in between. The break dancers returned to the stage to hype up the crowd a few times. The dancers were a cast of approximately 8 people, and were some of the best dancers I’ve ever seen – all of whom were of Native descent.

The show overall felt like they were revisiting their root sounds and amped up the bpm. It was hard to keep pace with them the entire time but it was a welcome evolution of songs with which I was familiar. I get the impression that they are pulling away from a political message, for what reason, I do not know. I look forward to seeing what they’ll bring next time they’re in town.